In light of the recent series release, I thought it was time I gave the book a full review (I did actually read it a month ago anticipating the upcoming release). Before I begin, let me put my hands up and say that I didn’t enjoy this book, I couldn’t enjoy it, which woman would enjoy it? But that was the whole point of the book so for now, before we delve further, let’s take a moment to appreciate how far we’ve progressed in terms of women’s rights.

The Handmaid’s Tale is a story based in dystopian America following Offred, our protagonist, living under the Gilead regime as a Handmaid. As a result of the military coup, the country is now under a theocratic military dictatorship. Offred’s role, like the other Handmaids, is to produce babies for men (Commander’s) of higher status due to the infertility of their wives. And that’s it. That’s her life. Yup. Fasten your seat- nope.

The book starts off on a melancholy tone that persists and we can sense the suffocation, limitation and the sense of collapse Offred is feeling and it’s unclear what is happening. Until we find out that as the result of a military takeover, killing off Congress and the dissolution of Government, under the newly established Gilead regime citizens of America gradually find themselves assigned to their new respective roles. The roles are as follows:

Handmaid – (See above), required if wife is infertile

Commander – Male head of the household

(Feeling suffocated and offended yet?)

Offred loses her husband, child, job, money, possessions, words, actions, dress and finally even her name. Offred essentially means ‘Of Fred,’ she is Fred’s. She is completely reduced to a baby-producing vessel.

There we follow her story in the respective household as she narrates the day-to-day, dreary life of a Handmaid with frequent flashbacks to her training at the Center and life pre-Gilead. Who wouldn’t want to revisit the past with a present like that?

She makes her trips to the stores (even the store signs have undergone change) with her assigned partner. This is when the present finds some excitement as through her partner she discovers the presence of an underground network for the Handmaids. This leads you to believe that there is hope for change, a potential rebellion that could lead to the destruction of the regime but you hoped wrong my friend, it proves to be a dead-end.

We are presented another hope as we gather from the flashbacks to the Center where Offred’s tenacious and daring friend Moira successfully escapes from the Center, having failed the first time. But to where? We discover through Offred and the Commander’s secret night-time excursion that Moira was recaptured and is now working as a sex-worker at Jezebel’s where the hypocritical Commander visits.

By the end of the book, as a woman, I was horrified as we’re left on some sort of cliffhanger. What happens to Offred? Does she escape? Or is it false promise that turns out to be punishment? Is there any hope at all because by the looks of it if someone as courageous, cunning and resourceful as Moira couldn’t escape, how could the others? It was no wonder that the previous Handmaid allocated to Offred’s household ended up taking her own life. 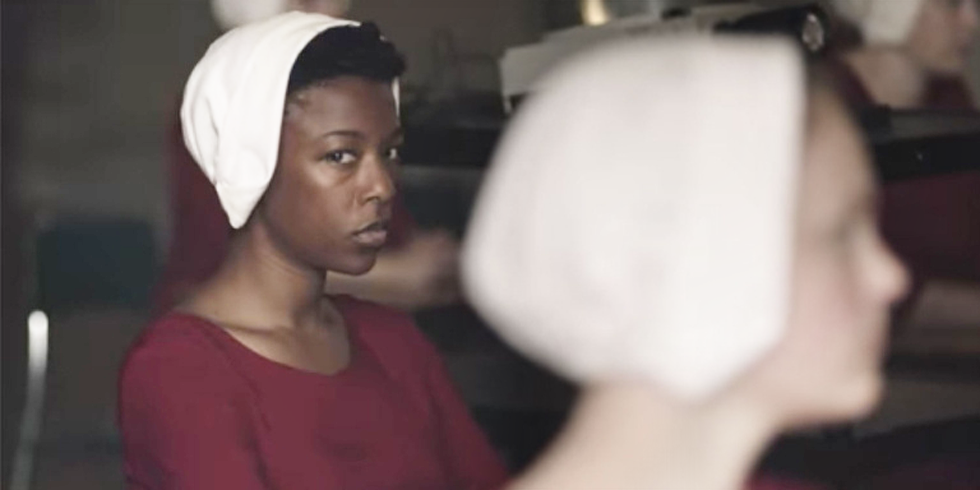 One of the recurring themes that we are oft reminded of, from flashbacks at the Center, was the sexual safety of women and how, in effect, the regime “successfully” combats this. And by sexual safety I mean non-consensual sexual safety. At the Center, the Aunts continually push Janine to recount her rape and explain how it was her fault. That now, thus, with the newly assigned roles for women, with their modest, covered clothing would be safe from this horror. However, isn’t forcing women to surrender themselves as reproducing vessels considered non-consensual sex considering that the alternative would be suicide? Isn’t this rape too? The regime contradicts itself. Let’s not forget the wives who have to hold their Handmaid while their husband attempts to make a baby with the Handmaid. Seriously, what the bloody fuck is going on?

Speaking of contradictions, another major flaw in the regime is the existence of places like Jezebel’s where women, who I’m guessing refused to be one of the female assigned roles, are forced to work as. Not only does the Commander have a wife, Handmaid, Martha’s who cook and clean for him, he also dabbles in further sexual activity at Jezebel’s. The regime offers some kind of sexual and sensory haven to men (those who have a higher status and may enjoy promiscuity) and a hell for women. I’m not saying it’s all fair for men as  even the Commander wants to be kissed like he meant it and not out of obligation and I’m sure there are gay men and women but in the game of who has it worse: it’s definitely the women.

Writing style is important, whether it is first, second or third person. But in a narrative like this it makes sense coming from Offred’s perspective leading (not so much leading) a lacklustre life, leaving very little to say and more to dwell on the past. Her thoughts just like her actions, words and person are restricted. She keeps it curt, concise and to the point throwing imagination out of the window as it has no place in her reality. But it does leave you wanting more… depth, elaboration. We do get it in some places but it’s a conscious quickly shunning when daylight appears and she must get along with her role.

A huge important factor in my enjoyment of books is the characters, if the character’s/protagonist isn’t complex it can make for a dull read. Offred isn’t the most interesting of characters, having said that one can assume it was a conscious decision on Atwoods part as in order for this story to be told in its entirety of the roles of women in Gilead, a character like Offred is needed. Through Offred we can gain a better understanding of the effects of the revocation of women’s rights and autonomy on all these women.

QUESTION ONE: WHY ARE WOMEN FORBIDDEN FROM READING IN THIS SOCIETY?

Yes, I know, it is unusual to add a question section and answer it myself in a book review or maybe it isn’t and I haven’t fully scoured the recesses of the internet. But I recently went to a book club function where the chosen book was one of my all-time top two favourites (Little Women) and it kind of fell apart as they didn’t seem to really discuss the book as much as they did their lives. Perhaps, it was a little nerdy of me to expect better but dammit as an avid reader I was really excited to discuss it and quickly disappointed. By the end of it I was wishing we did a QnA session on the book. So then, here we go (next para).

There are a number of reasons we can assume led to this decision. A) They are unnecessary and irrelevant and thus play no part in their assigned roles. B) Knowledge is power and the Gilead regime is not after female empowerment. Most first-generation Gilead women are educated anyway. Perhaps it is to prevent them from reminders of the past or to prevent a vision of a better, alternative life for the second-generation to come. Who knows what would happen if all the women decided to present a united front, even so there would be a need for arms and how would they gain access to an armoury? With enough brainpower (and ideas and tips from books) and numbers perhaps there could be a way?

QUESTION TWO: IF YOU WERE IN THE NARRATOR’S SITUATION, WHAT WOULD YOU HAVE DONE?

Perhaps negotiate with the Commander and find a way to Moira? At least that way, in the mess of it all, I’d be with my friend. I’d be with someone I love and recover a little semblence to life before Gilead.

“Don’t let the bastards grind you down.”

“Falling in love, we said; I fell for him. We were falling women. We believed in it, this downward motion: so lovely, like flying, and yet at the same time so dire, so extreme, so unlikely. God is love, they once said, but we reversed that, and love, like heaven, was always just around the corner. The more difficult it was to love the particular man beside us, the more we believed in Love, abstract and total. We were waiting, always, for the incarnation. That word, made flesh.

And sometimes it happened, for a time. That kind of love comes and goes and is hard to remember afterwards, like pain. You would look at the man one day and you would think, I loved you, and the tense would be past, and you would be filled with a sense of wonder, because it was such an amazing and precarious and dumb thing to have done; and you would know too why your friends had been evasive about it, at the time.

There is a good deal of comfort, now, in remembering this.”

“Better never means better for everyone… It always means worse, for some.”

“When we think of the past it’s the beautiful things we pick out. We want to believe it was all like that.”

“What I need is perspective. The illusion of depth, created by a frame, the arrangement of shapes on a flat surface. Perspective is necessary. Otherwise there are only two dimensions. Otherwise you live with your face squashed up against a wall, everything a huge foreground, of details, close-ups, hairs, the weave of the bedsheet, the molecules of the face. Your own skin like a map, a diagram of futility, criscrossed with tiny roads that lead nowhere. Otherwise you live in the moment. Which is not where I want to be.”

The Handmaid’s Tale is available for purchase: https://www.waterstones.com/book/the-handmaids-tale/margaret-atwood/9780099740919